Big game release, often long awaited sequels to a successful franchise is hyped to no end. With Deus Ex: Human Revolution, much of the hype is well justified. The game grabs you by the scruff of the neck from the minute you turn it on and gives your character a purpose in a world that isn’t a figment of someone’s imagination. The events in Deus Ex: Human Revolution are believable and the game gives you a choice to play it the way you want – a notion that many attempt but fail to create on an artificial stage – a noteworthy achievement. Deus Ex: Human Revolution is the third game in the Deus Ex series but chronicles events that took place before the first game. In the year 2027, the subject of biomechanical human augmentation has caught everyone’s imagination, and society’s divided in two prime factions – purists and augmented. In this volatile climate, secretive corporations are conducting ground breaking research to further human augmentations and tap into a multibillion dollar market. 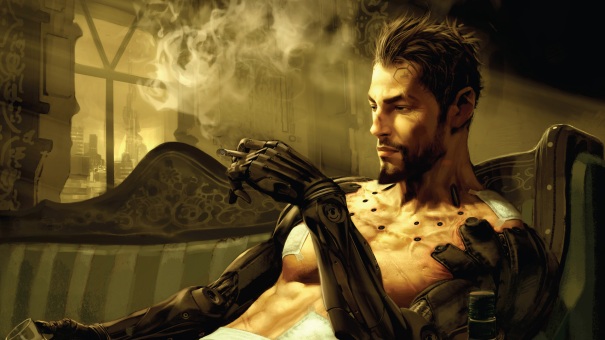 You play as Adam Jensen, the protagonist, head of security at one such corporation, Sarif Industries. Trying to investigate a simple break in, you uncover an extensive nexus of media, corporations and low enforcement agencies fighting for control, and shaping the future, of human augmentation. The story definitely strikes a chord on multiple levels, sucking you into the not so distant future that’s tantalizingly believable. A world we all imagine could come true, it isn’t farfetched sci-fi. Deus Ex: Human Revolution is quite successful in laying the foundation of an engrossing story line.

Then there’s the small matter of choice, giving players plenty of options to play the game the way they want to. Combining elements of stealth, action and role play, Deus Ex: Human Revolution manages to deliver a unique gaming experience. There is no single way to play this game, depending on the choices you make – whether it’s cornering a police officer to extract information or getting behind enemy lines – you will have multiple ways to reach an objective. You just need to explore, uncover, be supremely curious of everything in your surrounding and the game will reward you with methods that make your smile. A secured door can be hacked open, blown apart, or bypassed via a hidden vent; similarly an enemy can be shot down, knocked down or circumvented by sneaking – the plethora of choices available at your disposal really helps you lose yourself in the game, get totally immersed.

Human Revolution combines RPG elements very well with its primary action / stealth mood. Tuning you in-game character traits is done by augmentation and an active inventory – augment your arms to punch through walls and lift heavy items to uncover previously hidden access points, upgrade hacking skills to unlock heavily fortifies doors, become invisible to hoodwink unfriendly eyes. You can tune bodily augmentation and inventory items to suit your gaming style. Speech is an important aspect of the game, much like in Mass Effect – whether it’s Detroit of Heng Sha, you pick up clues and gauge the current mood of inhabitants in your location by conversing with them. The cover system in Deus Ex: Human Revolution is good but it could’ve better.

We liked the overall graphics and presentation of the game which is mostly dark, gritty, with exceptional visual contrast – sets the stage very well to get in character. Just like the sights, the in-game sound is quite engrossing. There are a few minor niggles – dated facial animation, Adam Jensen’s voice, mundane boss fights, and slightly lengthy load times. But that doesn’t take away anything from Deus Ex: Human Revolution’s overall experience, which is quite simply an A+.