From a table top board game to an intense third person action crusade, Warhammer 40K’s legacy has come a long way with Space Marine. Probably the most memorable adventure in the digital version of Warhammer was captured in Dawn or War, its various expansion packs and sequel – a real time strategy game. How goes it transition to a different style of game play? We were apprehensive about Warhammer 40K: Space Marine’s prospects but guess what, the game is fun. It’s a brutal universe in Space Marine’s story and the game does a very good job of painting a harsh, unfriendly environment for players – detailed Ork constructions are everywhere, blood is spilt in copious amount. It doesn’t take long for player to get immersed in this fictional world, the game’s audiovisual elements help heighten this experience. Right from the first scene – which shows Captain Titus leaping off his fleet to land on an Ork flagship – high Octane combat erupts; no time wasting here, it’s straight to business. Within seconds – a recurring theme throughout the game – you are surrounded by Ork hordes that want to spill your guts. 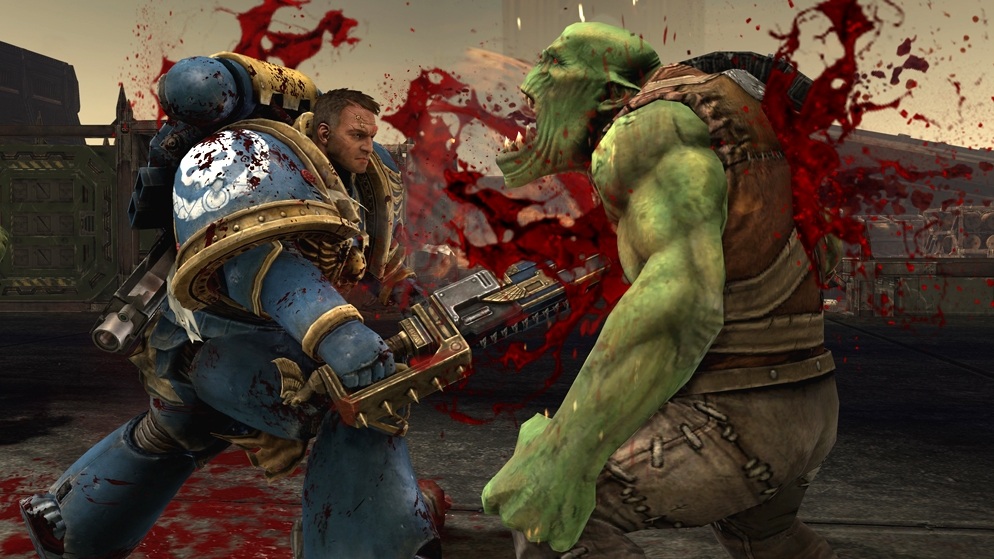 Choosing the arms at your disposal, you kill enough Orks to make a defensive wall against any more hostiles. As you trade blows and exchange fire, the game offers a timely walkthrough on controls and identifying objectives, all this within the first 10 minutes of starting the game – you literally hit the ground running. The frenetic pace of action is what one would expect from a Warhammer game.

Playing the Space Marine game in third person is the biggest draw for Warhammer fans and the system isn’t difficult to master. Although ranged assault isn’t always precise, furious melee at close quarters help spice things up. There is no cover system in Space Marine; we think this might have added a little zest to the largely repetitive game play. As you progress in the game, you get a range of weapons to choose from and battles become increasingly difficult. Orks are easy to kill unless they’re present in huge droves, Chao forces are slightly trickier to eliminate – as they should be – and they keep unleashing new horrors from time to time. There is very little you can do to fight the linear story line, the cut scenes become a tad too much for non Warhammer fans – upset thing the rhythm of mindless Ork culling – but the overall game play is what saves Warhammer making it so lovable.

Apart from hack-n-slash melee and ranged gunfire, Space Marine offers a fury mode – a temporary burst of anger that makes the player virtually invincible to damage, destroying everything in their path – which is uber fun. What we all wished we could do in past Warhammer games, we now can, finally. The range of strategic options to attack the enemy increases in later levels and the battles become a visual spectacle of blood, gore and utter mayhem. The boss fights are as good as one can hope to see in a Warhammer game – but not exactly epic or memorable.

The single player campaign in Space Marine is a long dramatic story line with carefully places plot twists – the story isn’t suspense and the plot twists aren’t really cliffhangers. We won’t spoil the story for you but the game play is certainly entertaining and worth checking out. Fans of multiplayer modes won’t be disappointed; the game mechanics work surprisingly well when paired with human opponents – instead of the campaign mode. There are two modes to choose from, team death-match and hold ground – both of which are good fun. We really like the interesting mix of melee and ranged combat game play that Space Marine brings to the Warhammer 40K table, it really works. Although the game disappoints in patches, the overall impression is good. One feels that future Warhammer games in the rough mould of Space Marine can only get better, so props to Relic Entertainment too.